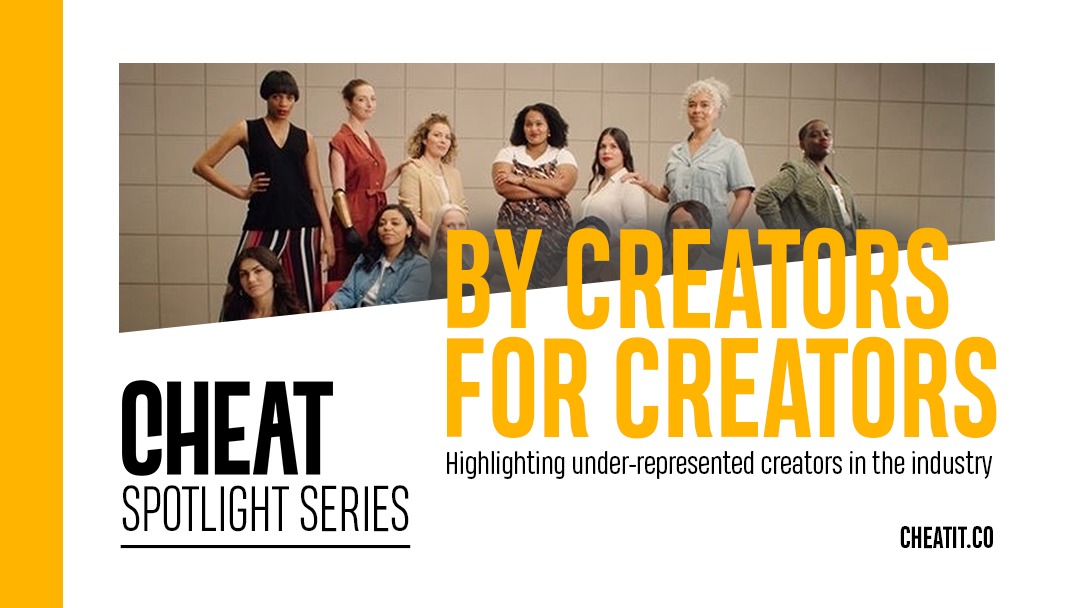 ‘By Creators, For Creators’.

Ours is a community where passion and diversity are nurtured and celebrated, which is why we’re using our platform to highlight under-represented creators from all over the industry - from Colourists, DoPs and Directors to Producers, Editors, Sound Designers and anyone/everyone in between. We want to champion those who shy away from the spotlight, those who aren’t yet in the spotlight, and those who statistically have less chance of ever getting to be in the spotlight at all!

Each month, we’ll be publishing an interview with a talented creator from somewhere in the industry, nominated by the person before. They’ll be sharing their work, their ideas and, hopefully, a bit of themselves! 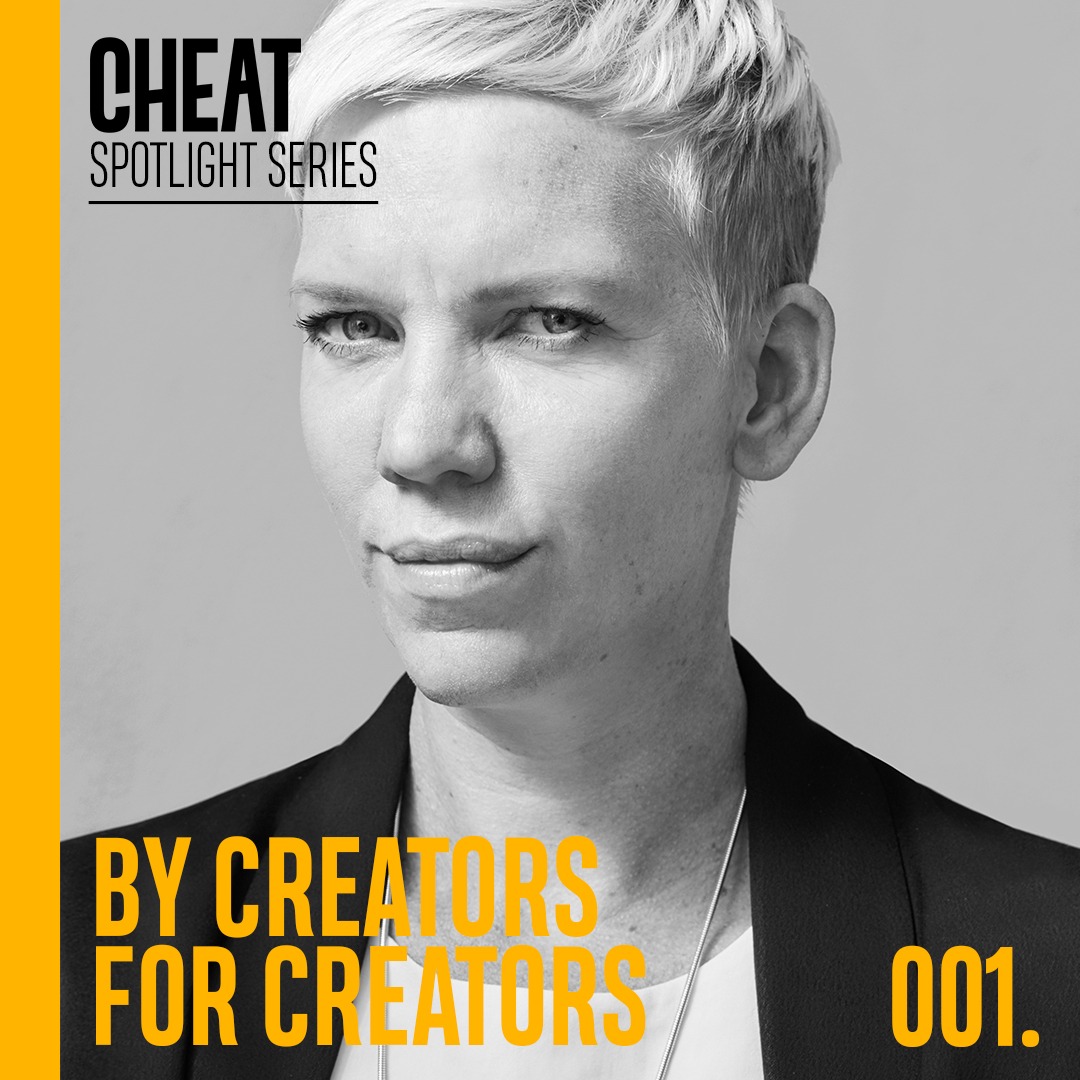 Frida began her career in an agency before a quick detour into wine (with a lot of product sampling!) amongst other things, and then back into production with some of the industry’s most respected production companies including Pulse and Iconoclast. Her role as a creator hinges on the facilitating of a supportive space for others to thrive in, and laying the foundations for opportunity.

Currently COO at Cheat, she discusses finding inspiration in people, how taking a break helped her realise what she really wanted, and why the industry needs to address work/life balance.

What inspires you? In work and in life.

FN: People. I find people and their individual stories incredibly inspiring, which is one of the reasons I started out in HR. Early on in my production career, I was lucky enough to land a role at Pulse Films where I worked with some incredibly inspiring people, Thomas Benski being one of them. He has this immense entrepreneurial spirit which is super inspiring and engaging but almost more impressive was the person by his side making all of his ideas happen, Marisa Clifford. I feel like I have brought this approach with me to Cheat, with Toby and I working closely together and complementing each other well as a team.

What’s the best/worst advice you’ve ever been given?

FN: That’s an interesting question. The worst advice was from someone in a leadership role quite early on in my career….this person told me “never to admit you are wrong” which I’ve come to realise is the exact contrary to my belief particularly being a Swede - we are renowned for our forthrightness!

I have however realised being honest means different things depending on where you come from, which is interesting. When I first moved here I didn’t quite understand how important the nuances of the English language were but now this is the part of the English language I love the most! Although I certainly don’t claim to always get it right, not being British by birth.

What would you be doing if you weren’t doing this?

FN: I always wanted to be a lawyer (who doesn’t love a great debate?!) but as a teenager I was slightly put off by the length of time it takes to qualify! In a way, I get the best of both worlds as doing this role you end up with various legal conundrums as part of the day to day.

FN: Last year was incredibly tough, probably up there with one of the toughest years of my life but also so immensely rewarding. I’d not long joined Cheat before the pandemic, and the challenges of being remote in a new-ish role, trying to look after people from afar was not straight forward at all but it had to be done. Wellbeing support is usually so much better done in person but we found a way, most of the times you do, and we are a stronger team as a result.

What career advice would you give to your younger self?

FN: Find your passion, do some work experience and get a job in the relevant field! Easier said than done I know but that’s what I wish I would’ve done. I try not to live with regret but if I had to say something work related it would be the fact that I didn’t push myself harder as a teen in getting out there and obtaining work experiences. This is why I am now keen to support young people, which I have always tried to do in previous roles, and now at Cheat.

How did you get into the industry and what was the process like?

FN: I ended up in the industry by complete accident. I hadn’t had much access to the creative industry before this apart from being friends with a large number of designers at University in Sydney and sneaking into their computer labs in the centre of town as my campus was out in the middle of nowhere!

A few dud jobs later, I got a job at an advertising agency and I absolutely loved it! It was so different to anything I had experienced before. I tried foraying into other fields of business, like shipping and wine, the latter was good because I got plenty of opportunities to sample the product - ha, but not ultimately for me. I just love working with Creative people too much to ever work in any other field again!

If you could change one thing about your job or the industry what would it be and why?

FN: I have two. More diversity in the industry and work life balance.

One of the things that made me fall in love with London when I first visited in my early teens was its diversity, so I was really quite surprised when I realised there was hardly any diversity in the creative industry. It’s something that’s slowly changing now but there’s still a way to go. I think the responsibility is a collective one and I try to make positive changes wherever I can.

Work life balance - it’s incredibly skewed in the wrong direction in the UK, particularly in London. Working longer hours as we all know does not lead to better or more creative work and if we don’t consciously try to encourage a balance, it’s easy to just fall into this trap. It’s something that we’re working hard to counteract at Cheat and I really feel we’re on the right track with a 4 day week, remote working and an emphasis on people’s mental health and well-being BUT there is always more we can do. Being an independent post house, we pride ourselves on trying things out and we will continue to improve people’s work environment in any way shape or form we can.

FN: Not sure I can say I’m quite there yet but I am certainly working on it! Chakra meditation is my go to to keep me balanced and calm. My favourite one is by Michael Sealey and it’s free on YouTube!

What’s the most satisfying thing about your role as COO at Cheat?

FN: Being able to make a difference, help people achieve their goals and also to be part of shaping the future of the industry to some extent. I’m very much a problem solver which lends itself very well to this role. With the nature of this industry there’s always something that needs to be figured or worked out, which I find super satisfying.

Do you feel a sense of responsibility to make positive changes in the company and the industry?

FN: Absolutely, both Toby and I feel great responsibility in terms of making an actual difference. There can’t just be empty words, there has to be action. We’re constantly making changes in order to provide a better environment for our team as well as the wider community.

What’s your relationship with creativity? How does it manifest with you?

FN: For many years I always thought I was not very creative but I have realised that what I do is to help facilitate creativity for others :)